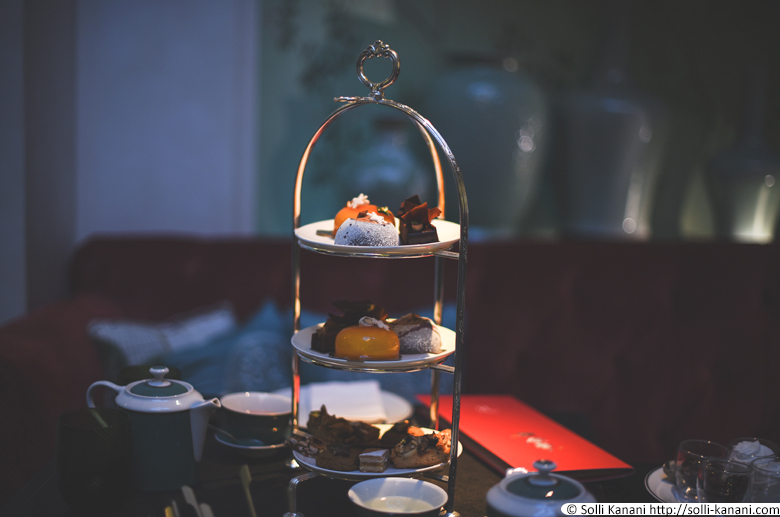 Last week I had been invited to try the Vegan Afternoon Tea at the luxurious 5-star Palace Hotel Shangri-La in Paris. Since the Executive Chef, Christophe Moret, started at Shangri-La, and invented the 100% Green Dinner they propose once in a month, they have gone even further in this green and healthy concept, and proposes 100% Vegan Afternoon Tea! In Paris I find it quite difficult to find places where I can have good vegetarian food or pastries, so I was very excited and curious to explore this Vegan Afternoon Tea![pullquote width=”300″ float=”left”]Exquisite Vegan Afternoon Tea in Paris[/pullquote]

Not only I got to endulge myself with these delicious, sweet and all vegan treats, but I also had the pleasure to meet the Head Pastry Chef himself, Michaël Bartocetti, that joined us for a while at our table. I took the opportunity and asked him a few questions. Was the “clotted cream” on our table really vegan? And how on earth had he managed to make meringue (in the Mont Blanc) without using egg-whites?! For the “clotted cream” he explained they had used soy milk and virgin coconut oil and whisked until getting this fluffy and creamy texture. The meringue, they had used the water that chich peas had been boiled in, and then whisked it also together with virgin coconut oil. If one wants vegan alternatives, it is possible, even though it might take time. Three months in this case, to create the all pastries, cookies and scones that are served in this Afternoon Tea. Michaël Bartocetti had teamed up with the sustainable development consultant, Bernadette Combette, who also is specialized in organic and biodynamic farming. With her expertise and skills they made lots of research and testings until they were satisfied with the results, gourmet classed vegan pastries and savory sandwhiches. [pullquote width=”300″ float=”right”]delicious and tasty, but also ethical and 100% vegan[/pullquote]

I was very impressed by the delicious and beautiful tasty treats that were served in the Vegan Afternoon Tea at Shangri-La in Paris and can definately recommend it. Here you’re not eating beautiful and sweet pastries, but also healthy and fair-trade and local sourced ingredients and seasonal products. Using no animal fat nor protein, non-refined sugar, no lactose and less saturated fat, its much easier for the digestation. Its the first time I’m not feeling “stuffed” after an Afternoon Tea. If you can’t eat everything, don’t worry, they’d be happy to offer you a doggy-bag to bring home.

The price for the 100% Vegan Afternoon Tea is 39€ (70€ for two) and includes 10 pastries and savoury sandwhiches. The Vegan Afternoon Tea that I had, is the Christmas version, costs +10€ extra, the cookies and cakes are decorated with cute stars and topped with edible gold leaf and you get a Gingerman bread as a gift! 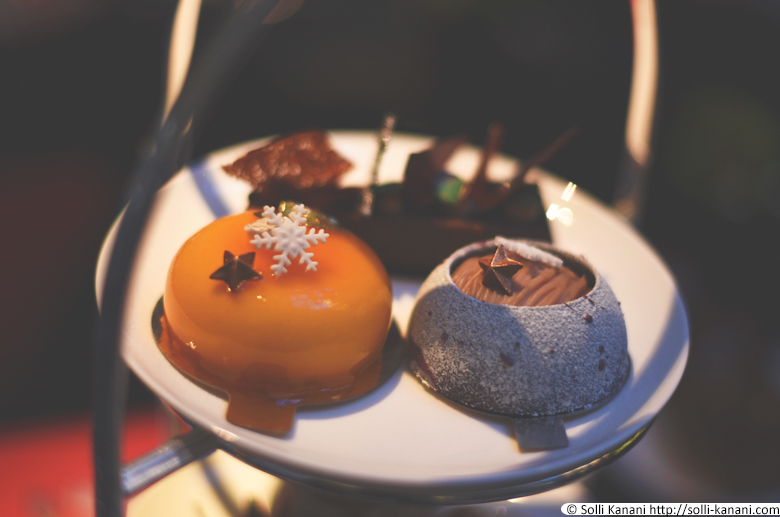 The three signature pastries in the Vegan Afternoon Tea at Shangri-La in Paris: the Calisson, Mont Blanc and Chocolate Tart 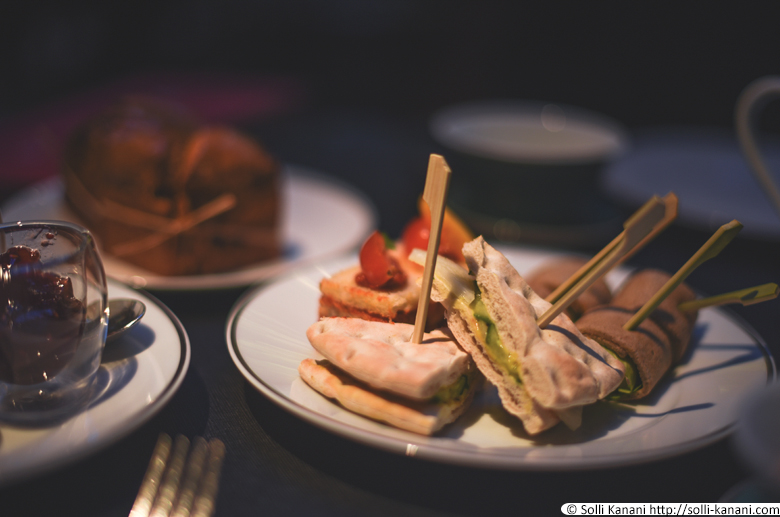 We started off eating these mini sandwhiches, one Sandwich Suédois with pickled cucumber, galettes with salad and truffle, and foccaccia with sundried tomatoes, all very tasty! 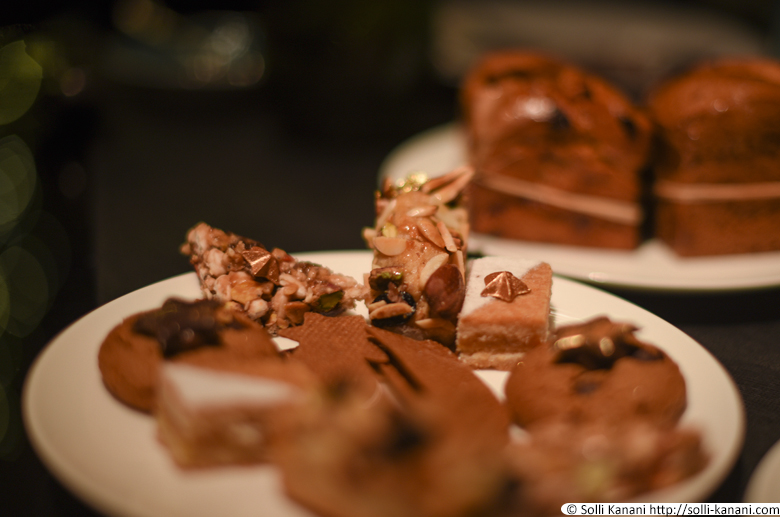 The cookies, classic figulo, fruitbar and a financier filled with pistacchio and other nuts and topped with edible gold leaf 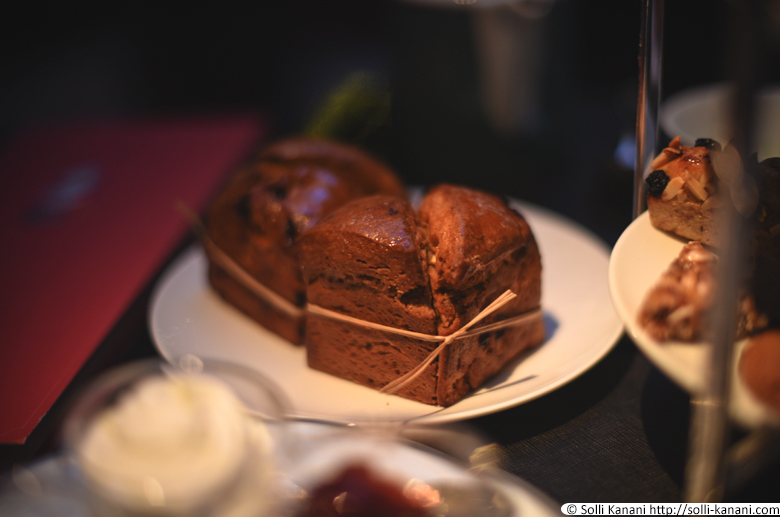 The scones, very delicious! One with raisin and another with apple chunks 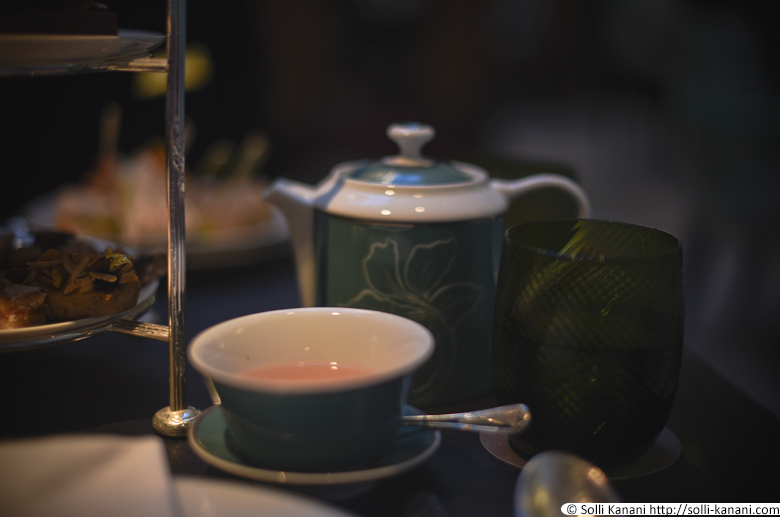 I had a delightful rosehip and hibiscus infusion…filled with antioxydants and Vitamin-C, well needed this time of the year 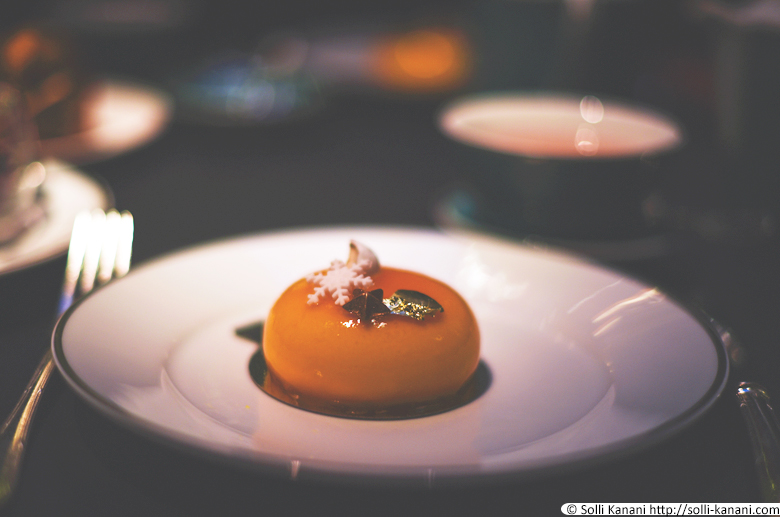 The Calisson, the first of three signature pastries that I tried. I’ve never had a Calisson pastry, only the French traditional candy, which I love. So having it in a pastry form was just a pure bliss. Light mousse made of oranges, either from Sicily or Perpignan in France (depending on the season), a financier biscuit made of almonds and hazelnuts all grown in Bourbonnais and almond paste. The Calisson couldnt have been better transformed than this pastry. 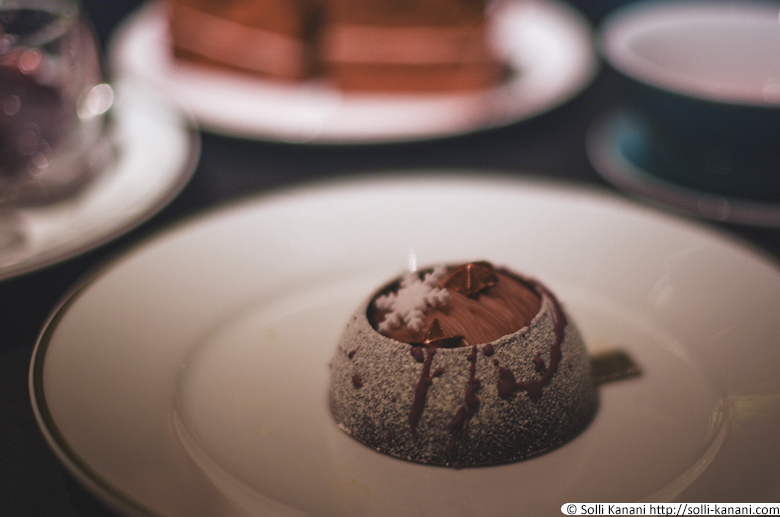 Next signature pastry, the Mont Blanc, one of my favourite pastries. But wait a minute, Mont Blanc contains meringue…no worries! Bartocetti has managed to create meringue with no egg whites, magic happends when you whisk the water from boiled chickpeas! And the whipped cream? All vegetal! And chestnuts from Lozère, famous for their chestnuts groves. 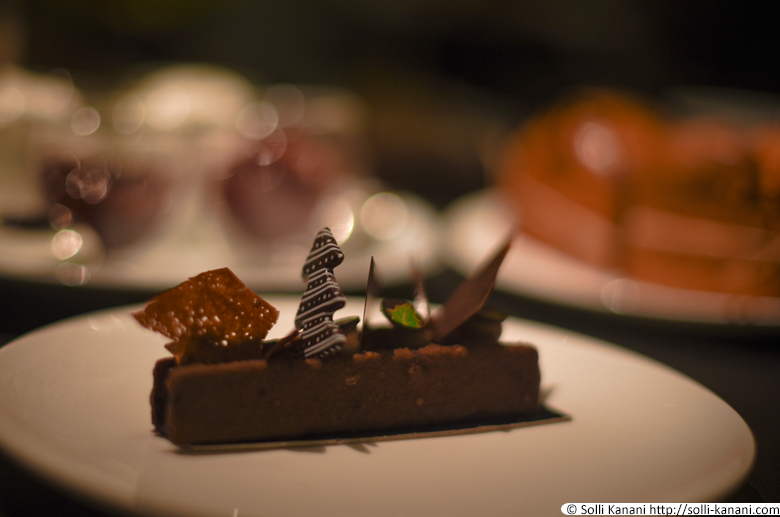 The last but not the least, the Chocolate tart, 100% cocoa, fairtrade AND organic! 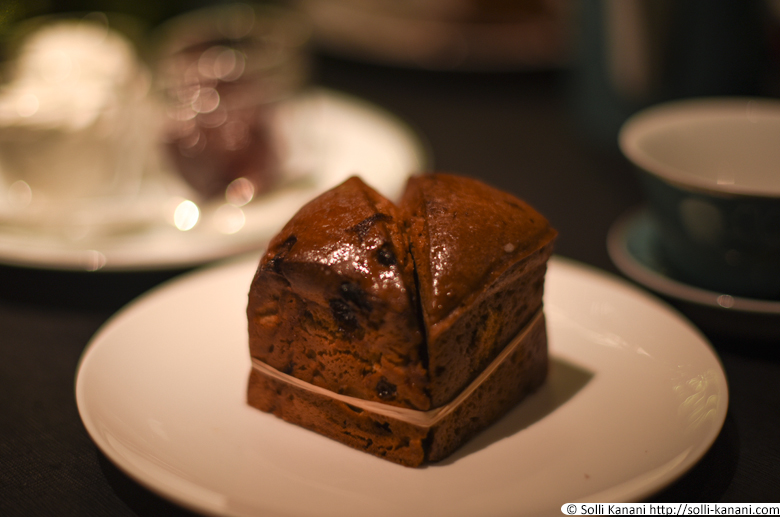 Delicious and very tasty scones, made with Manitoba flour from Italy 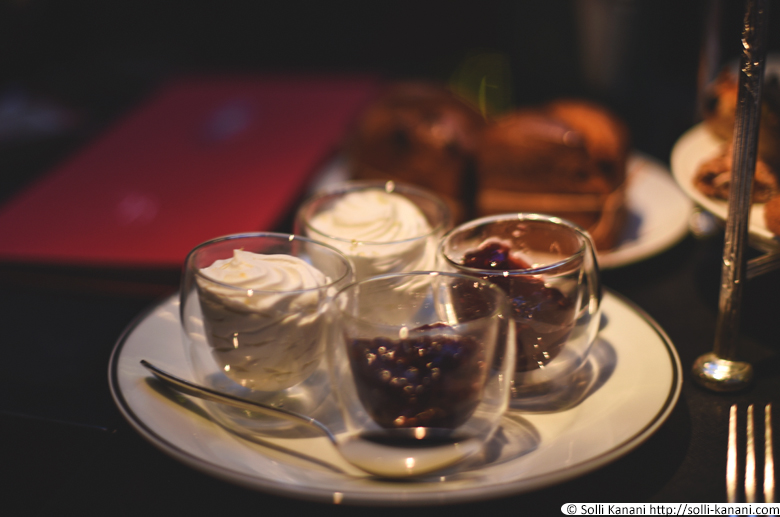 Vegan version of clotted cream and delicious jam for the scones 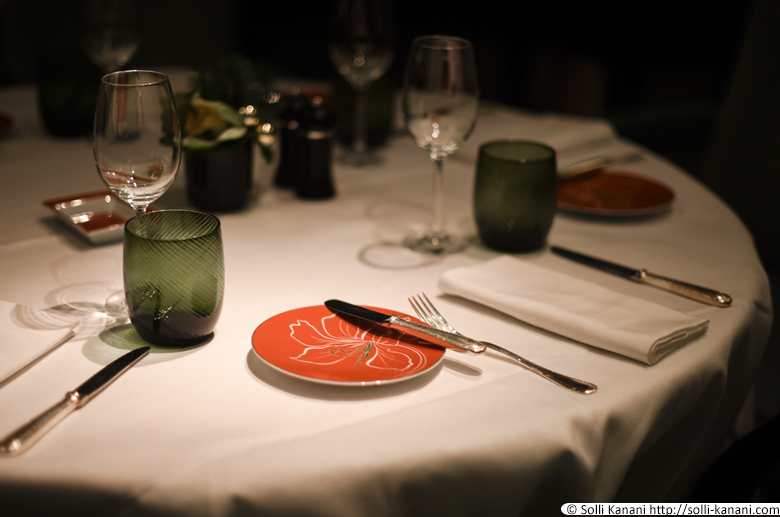 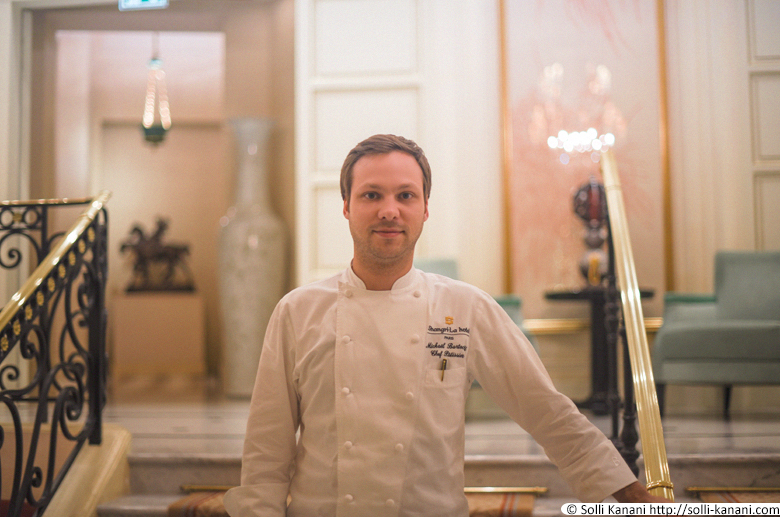 The Pastry Chef at Shangri-La in Paris, Michaël Bartocetti. He has previously been worin at the Michelin-starred restaurant Benoît in Paris and the three starred Michelin restaurant at Le Meurice. 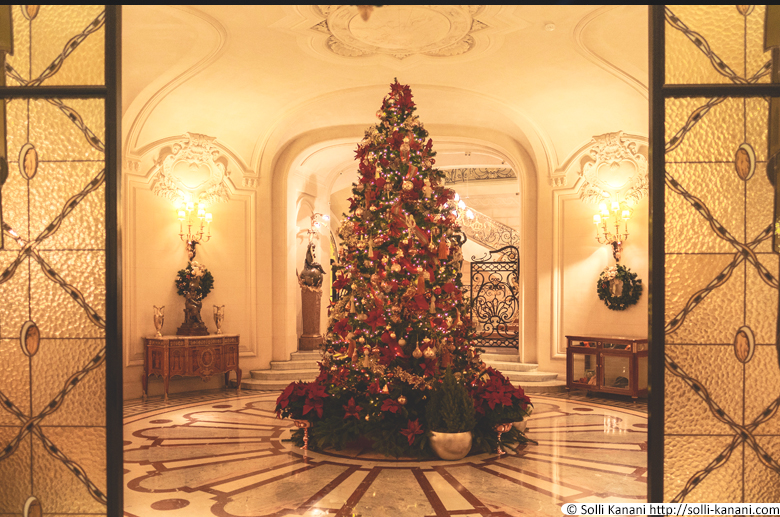 Christmas has moved into Shangri-La as well! It was nice to see the beautiful Christmas decorations in the hotel and the Christmas tree’s in many of the open spaces. Once this impressive palace belonged to Prince Roland Bonaparte, the grandnephew of Napoleon Bonaparte. Today this iconic monument is owned by the Luxury Hotel Group Shangri-La, that opened Shangri-La Hotel Paris, their first and only hotel in France in the end of 2010, after years of renovation.

The stairs leading down to La Bauhinia, with its impressive glass cupola with the same construction style as the Eiffel Tower. Did you know that Shangri-La Hotel Group didn’t discovered it until the renovation work had started? It had by some reasons been hidden, but after the surprising discovery they re-made their renovation plans and decided to create a restaurant just under the cupola and taking advantage of the daylight and beneath it there is a exquisite three-tiered Murano chandelier hanging. 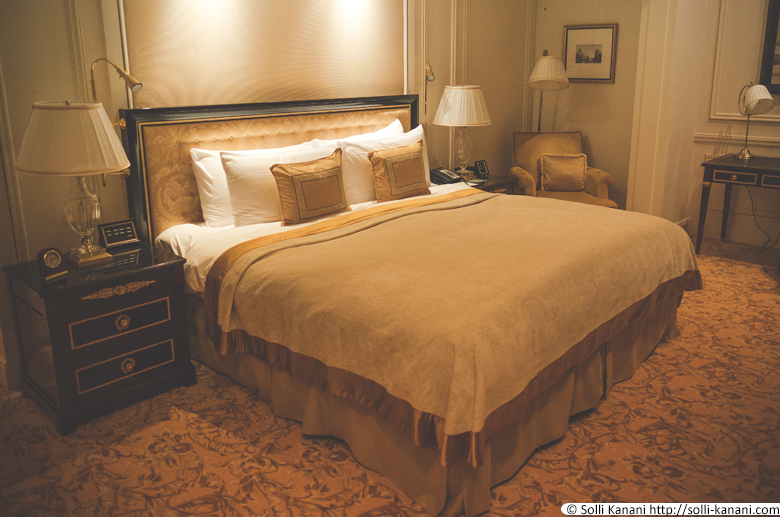 One of the suites at Shangri-La in Paris. The Interior Designer Pierre-Yves Rochon have made a great job in combining Empire and minimalistic luxury and the colours and textures of the wallpaper, the bedlinen, the carpeted floor and everything else you could find in the room offered altogether a harmony 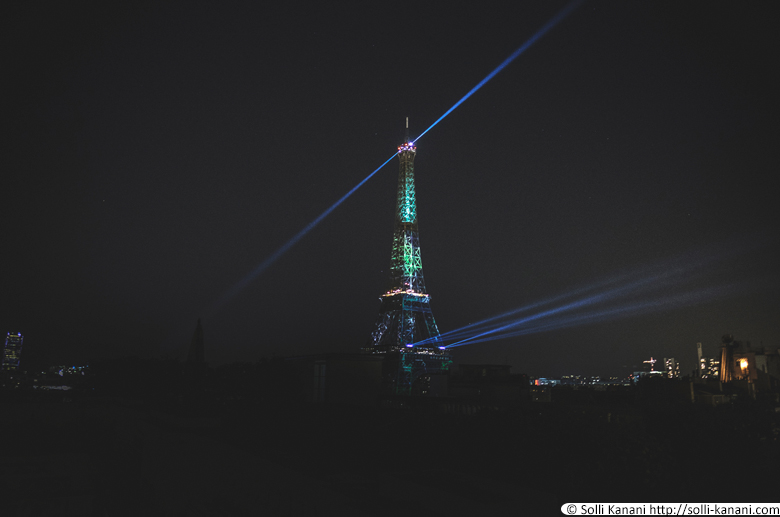 The Eiffel Tower “dressed up” in green, in the event of COP21 in Paris, seen from one of the suites at Shangri-La. Imagine waking up to this view <3 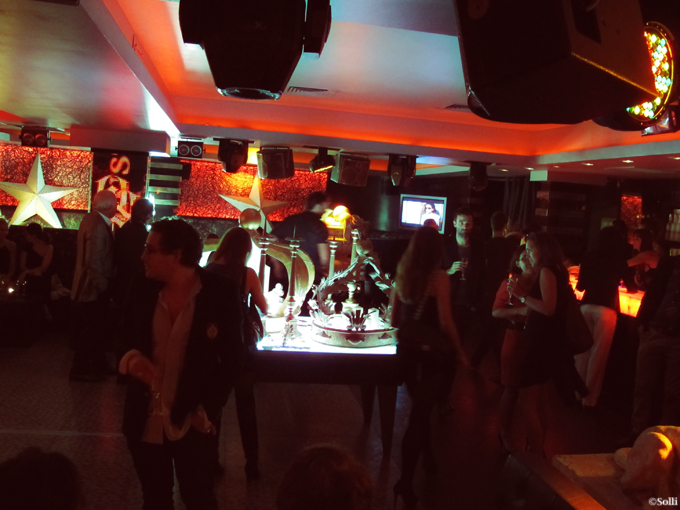 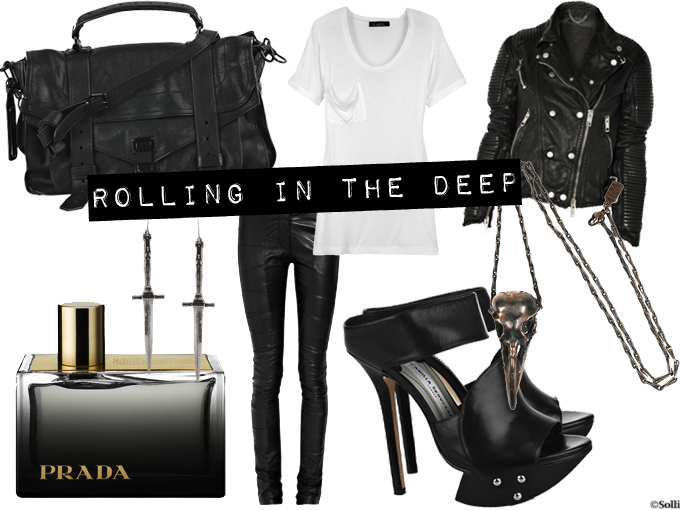 Rolling in the deep 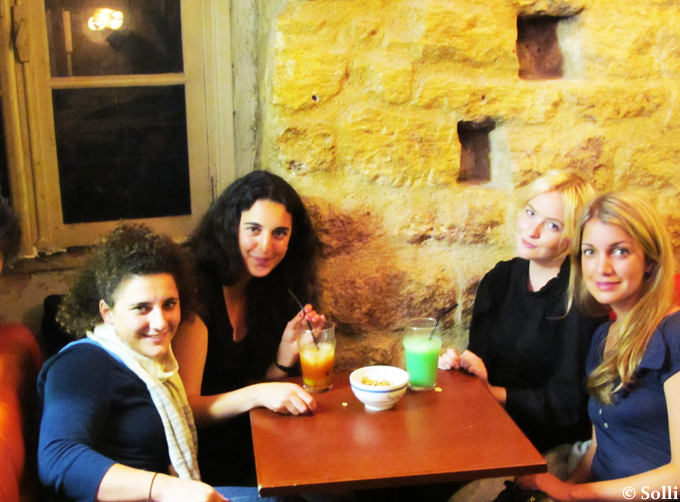 “If you want something you never had, you have t